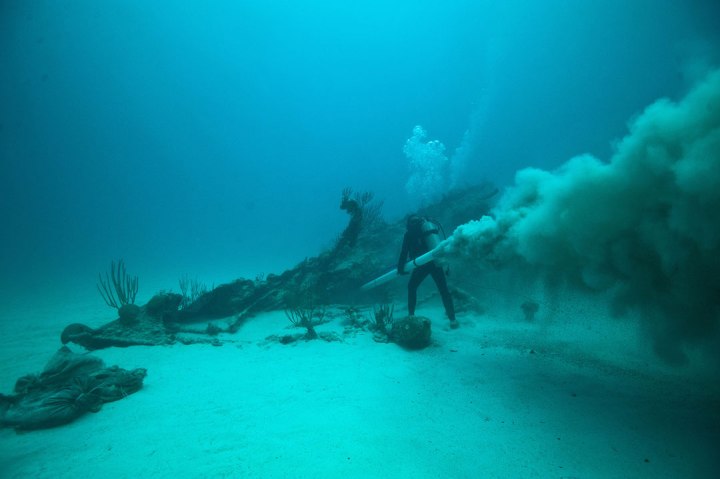 Originally published by the Qualcomm Institute

What if you could go on a digital dive to experience shipwrecks and other maritime heritage?

This is exactly what a team of engineers, scientists and archaeologists are planning to make reality as they launch the Bermuda 100 Challenge, an ambitious campaign to document at least 100 ships and artifacts as well as culturally and naturally significant sites in Bermuda’s shallow reefs.

Researchers from the University of California San Diego, collaborating with the Bermuda government,nonprofit agencies and other partners in the region, aim to create a comprehensive digital atlas of shipwrecks and natural habitats in Bermuda’s waters – an historical crossroads of shipping between the United States, Europe and the Caribbean. Using advanced underwater, aerial and satellite imaging tools, the team will record the wrecks and related artifacts to construct three-dimensional digital re-creations of the archaeological sites (including 3D video fly-throughs and interactive 3D computer models) without removing artifacts or disturbing the ecosystems.

Bermuda is a literal ocean laboratory on the western edges of the Atlantic’s Sargasso Sea. It has been the locale of some of the greatest developments in marine science and exploration: the expedition of the HMS Challenger (1873-1876), which discovered 4,000 unknown species; naturalist William Beebe’s deep-sea dives in the 1930s enabled by the newly-developed Bathysphere; and the Bermuda Atlantic Time Series, the world’s longest-running marine science ocean analysis, which is hosted at the Bermuda Institute of Ocean Sciences.

The island is surrounded by a large fringing coral reef ecosystem, the most northerly in the Atlantic. The Gulf Stream – the warm-water current that flows north to Bermuda from the Caribbean – allows corals to grow, and diverse plant and animal communities to flourish. The reef has protected the island from the ocean wilderness that surrounds the island, but has also been a center of human tragedy, claiming more than 300 shipwrecks since the 16th century.

Researchers say the reef appears, for the time being, to be resilient to changes brought on by shifts in climate that are deeply affecting other coral reef systems around the world.

Continued Kuester: “Shipwrecks become naturalized components of the benthic [sea-bottom] ecology. Their stories tell of human misadventure and tragedy, yet they create new worlds of discovery for marine scientists and students. Currently some photos and videos exist, and some artifacts  were found, but there is very limited mapping or visualization of these shipwrecks.”

The project was conceived and initiated by Rissollo and LookBermuda director Jean-Pierre Rouja as the first phase of their collaboration with UCSD to leverage disruptive technologies for documenting and participating in conservation, exploration and educational outreach whilst showcasing Bermuda’s cultural heritage and natural history assets as part of their Nonsuch Expeditions.

“Embedded in our reef,” added Philippe Rouja, “are shipwrecks from almost every nation and vintage. Some are highly visible and others have been completely reclaimed by nature. Creating a system that not only records where we are at today but also tracks changes over time will allow us to share this history with the broadest possible audience and document and conduct research to help us better understand the interface of human activity and natural reef ecosystems.”

One shipwreck that has already drawn the interest of archaeologists, marine biologists and divers alike is the Mary Celestia, an iron-hulled steamship from the American Civil War that sank in 1864. In 2011, Rissolo worked with Philippe Rouja, archaeologist James Delgado and LookBermuda | LookFilms to document the rapid excavation of the Mary Celestia. That excavation the subject of an upcoming PBS film was the inspiration for the Bermuda 100 project, and Rissolo noted the team “will be working with our colleagues in Bermuda to launch this bold initiative.”

Kuester and Rissolo say the value in documenting these shipwrecks goes well beyond tourism. The wrecks serve as time capsules of human history, while also sustaining thriving marine ecosystems. For engineers, however, they also provide a testbed for emerging technologies.

Accessing and documenting these underwater sites is a complicated feat for engineers. It involves LiDAR laser scanning to capture point-clouds, high-resolution photography, photogrammetry as well as structure-from-motion to convert two-dimensional images into 3D computer models. These tools and techniques pose new challenges underwater,  especially in Bermuda. Most of the shipwrecks are located in its shallow waters, where the interaction of sunlight, water and sediments creates unique difficulties for the creation of accurate and visually expressive 3D models.

“We are developing an improved workflow for underwater site documentation, raising the bar in the world of marine archaeology,” explained Rissolo. “We hope to bring advanced technology to these amazing underwater heritage sites. Falko Kuester has been building student-driven groups of engineers who are passionate about cultural heritage. As an archaeologist, I was incredibly drawn to that.”

“The Qualcomm Institute’s unique combination of talent and skill can supercharge large-scale studies like this,” remarked Kuester. “We’re good at creating teams and pipelines to handle this kind of data-centric exploration.”

Geoffrey Gardner, Deputy Chair of Bermuda’s Historic Wrecks Authority commented: “This technology makes shipwrecks accessible in ways we could only imagine a decade ago. Diving is the best way to experience our shipwrecks and reef, but this gives access in a way that diving can’t. The scope and detail in these images is more than you could ever see in a single, or even a series, of actual dives underwater. It is incredibly valuable for the monitoring and protection of Bermuda’s beautiful and priceless natural and cultural landscapes.”

Connecting with Natural and Cultural History

After the shipwrecks are captured with high-resolution, underwater imaging, researchers at UC San Diego take the raw data and images and turn them into digital re-creations.

There is a “whole range of possibilities that will bring these shipwrecks to life,” noted Rissolo. “The documentation could be used for anything from ecotourism and augmented-reality apps to the advancement of marine biology research, all promoting human connection to the natural and cultural history of Bermuda.”

Philippe Rouja considers Bermuda “the perfect beta site to conduct interdisciplinary marine studies,” noting that the response of Bermuda’s reefs to the changes being measured in the oceans around Bermuda “is the key to developing recovery and perhaps even repair methodologies to reef systems under threat to our south and around the world.”

The Director of Bermuda’s Department of Environment and Natural Resources, Andrew Pettit, remarked that the government of Bermuda “is entirely supportive of this project.”

“Our reef and wrecks are precious to us,” added Pettit. “Bermuda has a long track record of innovation in marine conservation and science, and working with UC San Diego will allow us to drive policy and management decisions with the best data available. The issues we are confronting are the same all over the world, and Bermuda is ready to play its part in communicating the risks, the opportunities and hopefully the methods for resolving current and future challenges. Data-driven decision-making has always played a big part of that – working with UC San Diego is a golden opportunity for us.”

The pace at which the Bermuda 100 Challenge documents wreck sites will depend ultimately on fundraising. On Saturday, March 25, professor Falko Kuester will address the 2017 TEDx Bermuda conference to unveil the project and, hopefully, begin to interest donors – including teams from around the world who are converging on Bermuda for the start of the America’s Cup races – in helping to defray the costs of deploying teams of UC San Diego students and local collaborators with the best available technology.

The team at UC San Diego is launching a pilot Bermuda 100 Challenge website in tandem with Kuester’s TEDx talk, initially covering several shipwrecks, including the Mary Celestia, the Blanche King and the Montana.

As the digital reconstruction of the shipwrecks progresses, the hope is that people will take a more vested interest in these sites, learning about their unique environments – without removing their artifacts. “This is a philosophy toward maritime heritage that we would like to spread globally,” said Kuester, “and Bermuda has a very strong track record of doing exactly that.”